Not much says Happy Halloween like a choir of spooky, white, gape-mouthed ghosts floating atop fluffy chocolate cupcakes! 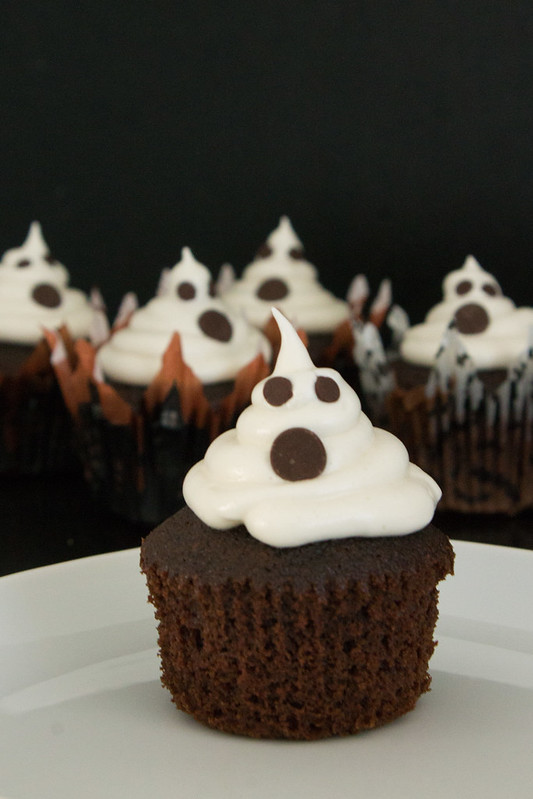 Happy Halloween! These cupcakes were a last-minute decision for my contribution to a Halloween party this weekend, and my goodness, was I glad to have stumbled upon the idea. I can take no credit for the concept, which is from The Baker Chick – a blog well worth checking out if you don’t already read it. Beautiful photography, fun recipes, and occasional pictures of two extremely adorable kiddos.

In any event, back to the main event: cupcakes with cute, spooky frosting ghosts. Apart from a momentary spasm of fear that the frosting was not coming together, these were easy and fun to make. Seven-minute frosting, I learned in a semi-frantic Google search, often takes longer than seven minutes and is not as simple as some cookbooks would have you believe. But, have no fear! Just follow the instructions carefully, and don’t be afraid to keep whipping on high speed until the stiff peaks (finally!) appear.

While it is possible to overbeat egg whites by themselves, I learned that sugar is a stabilizer, so it’s much more difficult to overdo it in a case like this one, where the sugar has already been incorporated before you whip the frosting. It also may help to add a pinch of cream of tartar, the acidity of which acts as an additional stabilizer. (Science!) So if seven minutes have come and gone and there’s nary a stiff peak in sight, stay cool. Turn your mixer speed way up, wait, and it will come together. 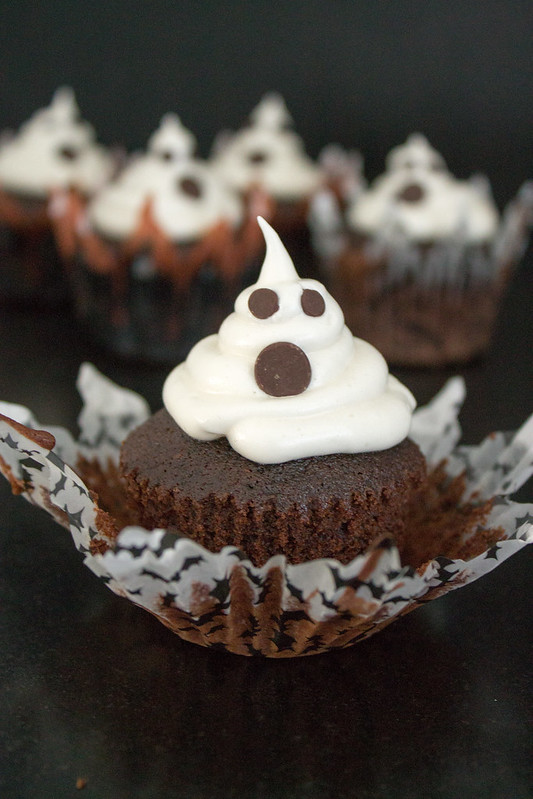 Placing chocolate chips for the ghosts’ mouths and eyes might only be a lot of fun for crazy people like me, but I imagine kids might enjoy it, too, at the right age (preschool? elementary? Henry is a ways from being able to do this without smashing the frosting into his face, so I can’t speak from experience on this one!). I only wish I had made and posted these sooner! But if you need one more last-minute ghoulish treat, or are filing away ideas for next year (hello, Pinterest), these are pretty much guaranteed to elicit oohs and aahs. Happy Halloween, and happy baking!

Directions:
To make the cupcakes, preheat oven to 350 F and line cupcake pans with paper liners. In a liquid measuring cup, combine hot water and cocoa powder and whisk until smooth. In a medium bowl, combine flour, baking soda, baking powder, and salt, and whisk to blend.

In a medium saucepan set over medium heat, combine the butter and sugar. Cook, stirring occasionally, until the mixture is smooth and the butter is completely melted. Transfer the mixture to the bowl of an electric mixer and beat on medium-low speed until the bowl is cool to the touch, about 5 minutes. Add the eggs one at a time, blending well after each addition and scraping down the sides of the bowl as needed. Blend in the vanilla and then the cocoa mixture until smooth. With the mixer running on low speed, add the dry ingredients in three additions alternating with the sour cream or greek yogurt; begin and end wih the dry ingredients and blend each addition just until incorporated.

Divide the batter evenly between the prepared cupcake liners, and bake 20-22 minutes, until a toothpick inserted into the center of the cupcakes comes out clean. Let cool in the pans for 5-10 minutes, then transfer to a wire rack to cool completely.

To make the frosting, thoroughly clean the bowl of your electric mixer, fit with the whisk attachment, and add egg whites. In a small saucepan with a candy thermometer attached, combine the sugar, corn syrup, and water. Cook the sugar mixture over medium-high heat until it begins to boil. At this point, begin whisking the egg whites on medium-high speed; ideally they will form soft peaks before you add the sugar mixture. Monitor the saucepan closely; when the mixture reaches 230 F, remove from heat and slowly pour down the side of the mixing bowl while the mixer continues to run.

Beat on medium-high for about 7 minutes (it may take longer, just keep going!) until the bowl is cool to the touch and the frosting forms stiff, glossy peaks. Add the vanilla just before you finish whipping the frosting.

Pipe frosting onto cupcakes right away, using a medium-sized plain round decorating tip, and decorate as desired with chocolate chips. (I used regular chocolate chips for the mouth, and minis for the eyes.)

Welcome! I’m Monica Lensink, a busy mom, recipe developer and photographer here at Nourish and Fete. I believe home cooking can be easy and rewarding, and love sharing inspiration and practical tips to help you eat well and celebrate the everyday.