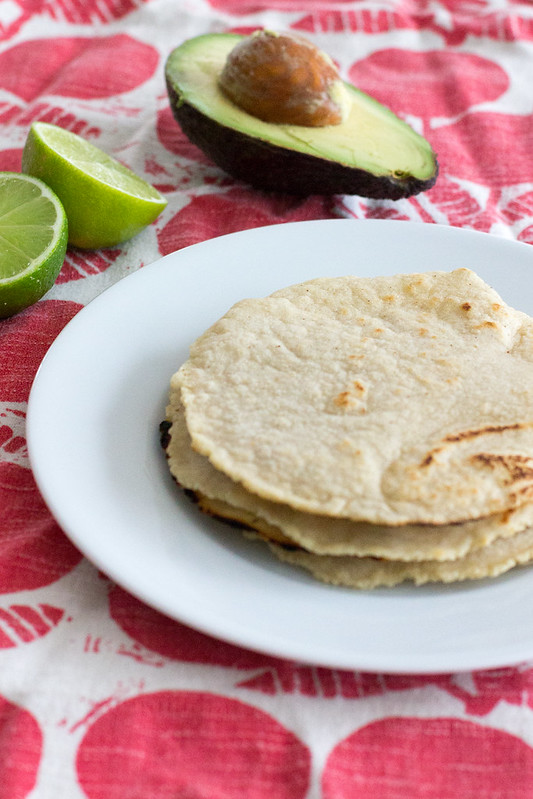 The year before last, my husband made a strategic investment by way of his Christmas purchases: a new Mexican cookbook plus a tortilla press. This fit the classic definition of a great gift: something I very much desired but almost certainly would not have purchased myself, owing partly to a reluctance to buy single-task kitchen gadgets, and partly to a very well-founded fear that I would find tortilla making intimidating and therefore not even actually use it all that much. Fortunately for all of us, my better half was smart enough to focus on the opportunity (tortillas!) rather than the admittedly minimal risk (more crowded kitchen cabinet). Thirteen months out, I’m pretty confident he’d say that decision is paying off handsomely in the form of regular taco nights, very many of them enhanced by homemade corn tortillas. 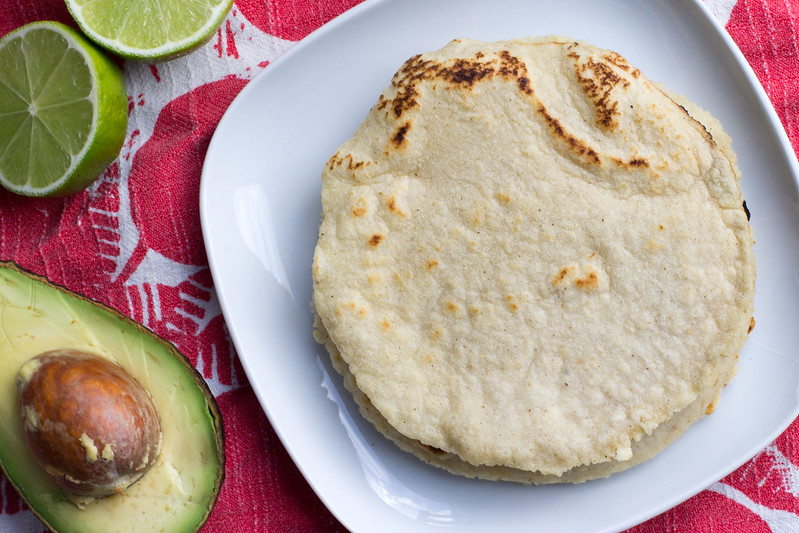 I’m at least a tiny bit self-aware, though. Tortillas probably seem unnecessary to DIY. I mean, the packaged ones from the store are perfectly acceptable, right? Especially if they’re encasing something rapturous like cilantro lime fish tacos or shredded pork in ancho-orange sauce. It’s true that store-bought tortillas are a perfectly adequate vehicle for delivering taco into your mouth. But try a freshly-made shell just once and you’ll know there’s really no comparing the two. Of course a taco with your everyday shell can be tasty and satisfying. But adding a fresh tortilla is like adding chocolate sauce to your brownie sundae. If it were all the same, you’d do it every time.

The great news is that making your own corn tortillas is extremely accessible at home, not to mention economical. The only ingredient you probably need to buy is masa harina, a corn flour widely sold at supermarkets. One bag of it will yield enough tortillas to feed your family very happily for a multitude of meals. Mixing the dough takes about five minutes. Then let it relax on the counter until you’re ready for the real fun: shaping. Yes, a tortilla press makes the process faster (and OK, maybe a tiny bit more fun), but you can achieve the same results by pressing the tortillas between two pie plates or heavy-ish pans, or rolling them out by hand.

As I wrote out the steps below, I wondered if a step-by-step photo tutorial would make things more clear. If you’d have any interest in that, let me know in the comments, and I’ll do my best to make it happen ASAP. Because really, I have become a little tortilla evangelist, believing firmly that you ought not go a day longer than necessary without fresh, dimpled, pliable tortillas in your life, and would be extremely happy to do anything that helps you add them to your next taco or enchilada fix.

Print Pin Recipe
No ratings yet
Leave a Review »

Welcome to Nourish and Fete, where I hope you find inspiration to help you eat well and celebrate the everyday.